Everything else psy related. Ideas & life ~~ share your trip and psy experience and etc... 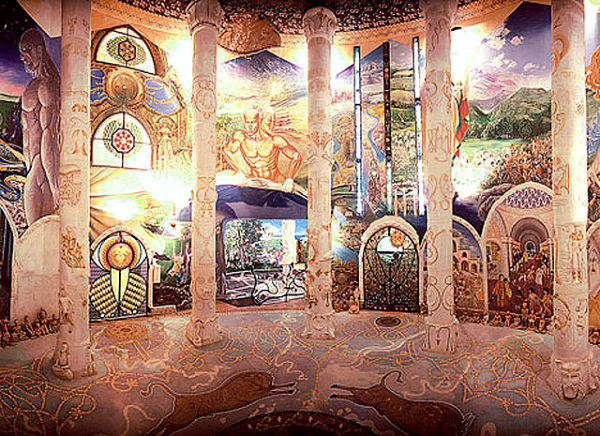 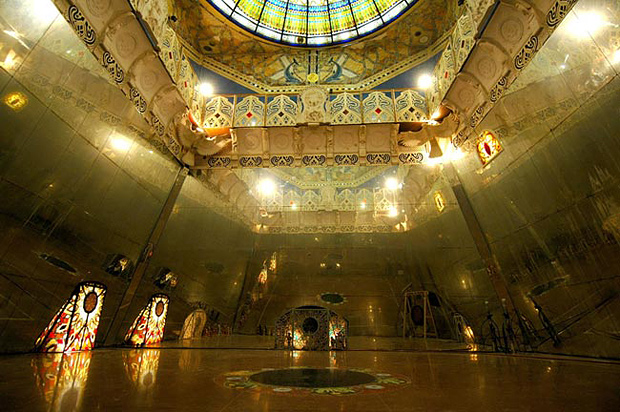 The Temples of Humankind are a collection of subterranean temples buried 100 ft underground. They are decorated in several motifs stressing peaceful human collaboration. The Temples are located in the foothills of the Alps in northern Italy, 30 miles from Turin, in the valley of Valchiusella.

The temples were created under the direction of Oberto Airaudi who, having claimed visions of ancient temples at age 10 from a previous life, began excavation and building in August of 1978. By 1991 most of the chambers were reportedly complete when Italian police, acting on a tip from villagers, conducted a raid on the Temples. Eventually the Italian government reportedly gave them retroactive excavation and erection privileges and the Temples are now open to visitors.

Parts of the Temples:
Hall of Water – dedicated to the feminine principle, it is in the shape of a chalice and invites receptivity
Blue Hall – for meditation on social matters and is used as a place of inspiration and reflection
Hall of Earth – dedicated to the masculine principle, to the earth as an element and planet and to past and future reincarnations
Hall of Metals – represents the different ages and developmental stages of humankind and the shadow elements of the human psyche
Labyrinth Hall – showing Interfaith worship through the centuries, uniting different cultures and peoples
Hall of Spheres – positioned where 3 synchronic lines merge, inviting planetary contact and transmission of messages, ideas and dreams to create harmony between nations
Hall of Mirrors – dedicated to the sky, air and light, solar energy, strength and life. There are 4 altars to earth, water, air and fire

History of the Temples of Humankind

Birth of the Temples
The first pick struck the rock on a warm August night. It was a Saturday evening in 1978. Oberto and about ten other Damanhurians sat around a fire. It was in a clearing behind a house in the shelter of Vidracco hill.
A large star fell across the sky, a sight rarely ever seen, bright and slow. It left behind a trail of visible gilded stardust that fell to Earth.
It was a positive sign; a good moment to begin to dig a tunnel into the mountain, towards the heart of Earth, to create a synchronic contact, to build a temple the likes of which had not existed for a thousand years or more. Everything would have to be created by hand and will power, in a job of work that nobody at the time could possibly conceive of.
These unexpected words of Oberto Airaudi had been so vital and full of expectation that, as soon the meeting was finished, two of those present began to dig at the designated point. They had only a hammer and a pick, but they continued to dig with great fervour all night until the morning and when others came to take over, they had already dug over a meter inside the mountain.
The turns continued non-stop with groups of people working for four hours at a time, for fifteen days, then the pace relaxed a little, but they never stopped, and everyone participated with equal ardour.
The digging was done with only a hammer and chisel, shovel and pick and a curved pick which was bought specially. The tunnel continued to be dug on into the side of the mountain.
For the fifteen busy people involved in the job, digging inside the mountain was synonymous with digging inside of oneself: The enjoyment and the serious importance of the work strengthened their union and friendship.
The Damanhurians worked intensely, tenaciously aroused by an enthusiasm that united all in the pleasure of group activity and the taste for secrecy. Secrecy because at this point they did not have permission to excavate. The permission would never have been granted for a project that seemed impossible to realise and in a region that has no laws to control such construction.
Whenever the moon was full those leaving the corridor being dug behind the house would lie down on the ground and gaze at the stars, in an atmosphere that seemed totally unreal.
Pick and shovel, buckets, pick and shovel, chisel and hammer, buckets... The earth fell in small muddy blocks. It was at once clay, then rock, then earth of the millennia, never before touched by human microlines. A primeval element.
To enter the corridor it was necessary to bend over and the tunnel seemed very long and narrow, but working there gave the diggers an inexhaustible supply of energy of primordial strength. All those participating always wanted to return and continue the progress, to conquer new spaces. And the mountain permitted the penetration, ever maternal and ever kind.
After many long days of digging, over a couple of months, the first phase was completed and a niche was built in the side of the corridor to make contact with the Earth in meditation practice.
Now that the symbolic ritual of digging with only with human strength had been completed, it was possible to acquire an electric hammer. Sometime afterwards a second one was bought and from two opposite sides they began to dig two large semicircles. Following very precise calculations and without any room for error.
The moment at which the semi circles met was celebrated euphorically by the diggers. And after the celebrations the job of work began, with even more fervour, to dismantle the central column of earth, attacking it from all sides simultaneously.
A rather large circular cavern was formed, where many people could be present at the same time. The place was damp and dark and it produced intense feelings.
The walls were plastered directly onto wet earth. The mortar was mixed by hand outside; nobody had any experience in construction work, but undertook to build the walls and the semi-spherical ceiling. Some parts of the particularly unstable corridor were strengthened with masonry bricks.
Finally, a mosaic floor was prepared and created with large Luserna stones.
When the work was completed fruits from the garden and home-made bread cooked in the wood oven were taken inside. Everything was divided between those who had worked and in the centre of the room some herbs were offered to the fire.
It was the space that would become the Blue Temple.

The Temples can be visited every day. They are available for individual or group meditation, to celebrate life’s milestones such as a wedding or the welcoming of a newborn child.
Ceremonies and initiations of all spiritual schools of the world are welcome.

Re: Damanhur - Temples of Humankind

Return to “Psy culture :: music & beyond”

Users browsing this forum: No registered users and 1 guest